The sound of 1000s of developers updating footers…

I love the smell of the new year in the morning. As in the tweet above, there is something hopeful in starting a new blog by first updating the copyright notice at the bottom.

Nevertheless, what is currently occupying my mind is not as much how 2016 started, but how 2015 ended. As luck would have it, within weeks I had a chance to present about our production experience with micro services to two enterprises –  a mutual fund and a bank. Both were curious about them and simultanously unsure as to how they would apply in their unique situation.

In such discussions, the topic of Netflix inevitably comes up, and I am not sure this is a good thing. Sure, I enjoyed watching The Social Network like the most of us, but I am not sure it taught me much about how to become Mark Zuckerberg. Certain experiences, approaches and stories are so intensely singular that their utility as a ‘how to’ manual is quite poor.

In the case of Netflix, I have noticed two characteristics that are not very useful in most scenarios where micro services are considered:

The consequence of the fact that you don’t need to prepare to handle a third of all Internet is that the overhead equation skews towards having fewer large micro services, rather than many small ones. In fact, it is surprising what transpires when discussions go a bit deeper into the ‘why’ direction.

As you probably know, I am on the record claiming that micro services are more about future-proofing, solving organizational problems of large teams and DevOps than any particular technology. It has become apparent to us as we talk to companies that the problem of two speed IT is more acute and pressing than replicating Netflix’s improbable feat. In the two-speed systems, companies can preserve investment and control through exposing the current system of record through APIs, while building up a cloud-based micro service system that consumes those APIs and serves Web and mobile experiences at the required speed and agility. You don’t need thousands of micro services for this.

In fact, more proof that the pragmatic pendulum has swung towards more reasonable architectures  can be found in the coining of a new phrase – Self Contained Systems (SCS). It is a neat workaround for the cognitive issues that may come from the term ‘micro service’. The term ‘system’ implies something larger, so even the illustrations of SCSs imply no more than a dozen or so. All the good properties of micro services are preserved (polyglot persistence, ability of teams to develop and deploy them independently, stack independence), but there is no expectation to deploy them in the hundreds and thousands. Sure, a self-contained system can in turn consist of several micro services, but at that point it becomes implementation detail.

It is probably best for companies dipping their toes into the micro service world to think about self-contained systems instead, lest they are taken down the Netflix path which will most likely be wrong for them.

I make my own underwear

The point of custom code from above reminded me of a story from the days when I was still climbing the audiophile ladder and cared about hi fi companies and stories about them. In this particular story from 2011, a parent company IAG that owns illustrious British names such as Quad, Mission and Wharfedale, describes its process like so:

One of the immediately notable things about IAG’s operation is the extent of what they make themselves: from new parts, to the tools to make those parts, through to all their own speaker drivers: the vast bulk of what goes into IAG products is made right there in the Shenzhen factory. They even manufacture their own wire.

What Hi Fi: Behind the scenes at IAG

The advice ‘start by making your own wire’ would make sense for very few companies, and the same applies to most enterprises trying to replicate Netflix’s approach. This comes into sharp focus when you start discussing concepts such as service discovery. Consider the following diagram: 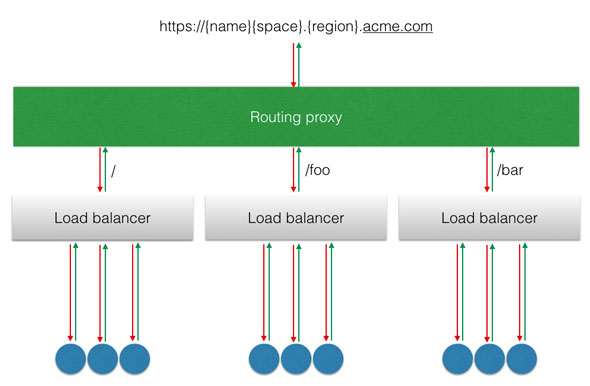 The URL of the micro service system is composed based on spaces (dev, QA, prod) and regions. It can be easily constructed or scripted. The routing proxy partitions the path namespace, and each path acts as API and is driving a load balancer which in turn handles any number of micro service instances.

I am showing you this because we are running this successfully in production right now. If you want to, say, hit the development version of the micro service system running in US1 data centre, you would have something like https://foo-dev.us1.acme.com. A script with a couple of substituted variables is all you need to hit the system you want. As for the load balancer, it comes for free in the IBM’s Cloud Foundry-based PaaS (Bluemix).

If you have a Netflix-type system, you need service discovery just so that you can connect all your micro services, all flailing around at the unguessable IPs and port numbers. And since you need to build everything yourself, a simple thing such as load balancing that comes out of the box in all PaaSes and a number of IaaSes is something you need to provide.

Netflix story is unique for many reasons, and having to build everything yourself is one of those characteristics not necessary in 2016. Cloud today is all about what you can outsource to a PaaS or IaaS vs what is uniquely your value add. Building load balancers is doable but a rarely justified practice today.

Yes, I know, forgive me for the click bait – SEO and all that. But by now you are well versed with the tongue-in-cheekness of the ‘For Dummies’ franchise. As people finding value in them are hardly dummies, so are people wisely choosing Self-Contained Systems instead of going down the path of the thousand micro services. Running a half a dozen to a dozen independently deployed, agile self-contained systems hooked up to your legacy systems may be the best choice for you right now. You can always add more, but don’t feel pressured to do so.