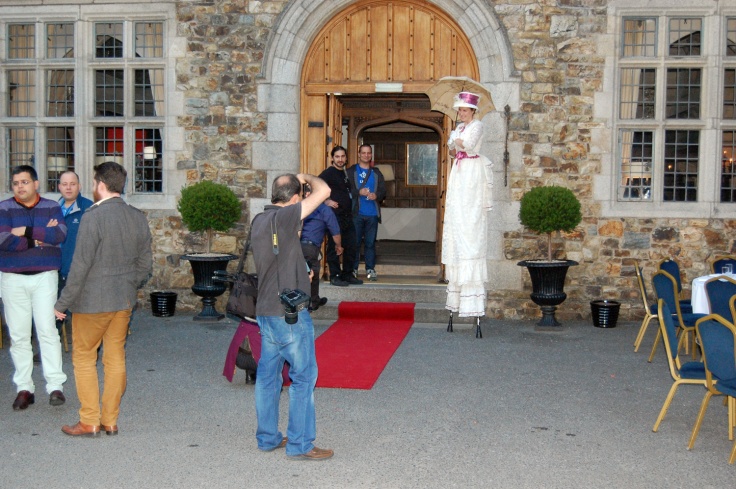 Shady’s back, tell a friend! Fresh from the green grass of Ireland where I attended (and presented) at this year’s nodeconf.eu, I am now back to report on it as promised.

This year’s conference is a second instance of a format started last year by Cian Ó Maidín and the friends from Near Form. The goal is to carefully curate talks across the Node.js community to ensure quality over quantity. I had a great pleasure attending the conference, particularly as I was one of the ‘carefully curated’ speakers this year. What adds a particular flare and sparkle to the event is the location – an actual Irish castle in Waterford, a south-eastern town of Ireland and the oldest of them all.

Having coffee in the lobby of the Waterford Castle, being early for @nodeconfeu. Fell asleep in the bus, almost missed my exit #facepalm.

Getting to the Waterford castle involves an excerpt from the movie Plains, Trains and Automobiles – an itinerary that involves flying to Dublin, catching a bus to Waterford, then switching to a taxi that at some point needs to go over the river Suir via a private car ferry to get to the castle on the island.

The event started in the evening with a welcome reception that involved circus acts – a very ‘tall’ lady (see above) and a guy literately playing with fire. 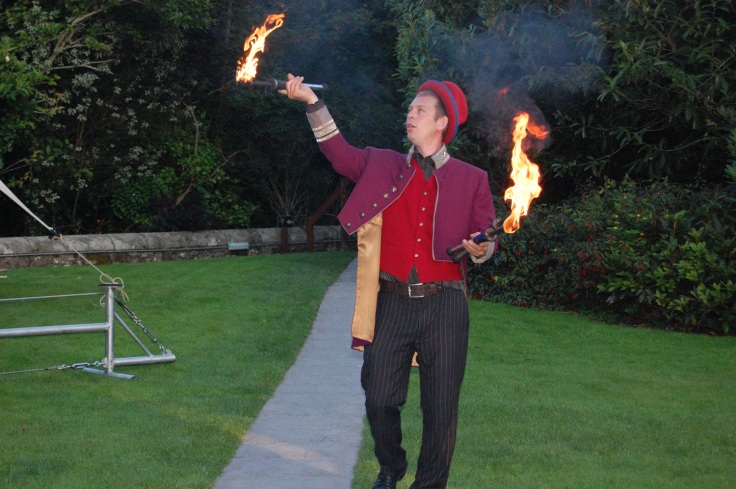 After-dinner entertainment included a lovely young lady playing a cello and singing in a way that fuses transitional Irish music and modern sensibilities – perfect for Irish hipsters (they do exist, don’t they?). Unfortunately her name escapes me – if you know it (and have a link to her home page), please drop me a comment (Edit: @fritzvd was kind enough to point out her name is Alana Henderson – thanks!).

Nodeconf.eu was held in a club house of the nearby Golf Club (part of the same Waterford Castle resort). For the next three days, our master of ceremonies was Mikeal, who was well known to most attendees (just look at your apps and if you require ‘request‘, you know him too).

Conference opened with a welcome addressed by Cian, outlining what is awaiting us for the next three days, and upholding the conference Code of Conduct, which was wonderfully short:

The technical part of the conference started with Node’s own TJ Fontaine, Node.js core lead, with his ‘State of Node’ address. TJ posed that the industry is in a state that makes this a perfect timing for a JavaScript framework. He also re-iterated some of the key tenets of Node.js philosophy, including non-blocking I/O and ‘do one thing, and do it well’ ethos. Finally, he stressed that the evolution of Node.js is not about what other languages or frameworks are doing, but what is good for Node.js and JavaScript themselves.

NearForm’s own Richard Rodger kicked off the Micro-Services block with the accumulated experience of deploying micro-services (and in particular Node.js micro-services) in production. He highlighted some natural advantages (scalability, flexibility of deployment) but also disadvantages (added latency). From his real-world experience, he concluded that business logic should be in the services (no core monolith), that developers should resist Tower of Babel (the temptation to use many languages and stacks) and to assume you can design upfront (services are ‘discovered’, not designed). Nevertheless, he reiterated one of the strong suits of micro-services – the fact that you can change your mind, swap databases mid-project (or anything else).

Clifton Cunningham focused on a very hard problem of micro-services – the fact that while multiple services are responsible for various parts of the system, pages still need to share some content. He enumerated options used in the past – client-side stitching using Ajax, front-end server, Server Side Includes (SSIs), Edge-side includes (esi) etc. He presented his team’s take on the problem – an open-source module called Compoxure that has a number of advanced features to deal with the problems normally faced in production – performance, latency, failures and authentication. He also addressed the problem of delivering CSS and JS for this shared content across the micro-services.

Then it was time for me. My take was how my team in IBM DevOps Services decided to pursue micro-services in general, and Node.js in particular as we started evolving our system. I don’t need to go into details – this whole blog is a weekly chronicle of our journey. I added a twist from a position of doing Node.js in a large enterprise – the need to legally vet a large number of Node.js modules (causing legal to hate us) and the complexity of deploying a large number of services in a secure manner (causing OPS to hate us).

The last speaker in the Micro-Services block was Fred George, bringing his wealth of experiences building micro-services in a number of real-world projects. He brought forward several examples of projects using different technologies and architecture, unified in the fact that most of the time an event based (asynchronous) approach was a better fit than synchronous. Out of that experience he extracted a concept of a system where all services receive all the messages all the time, but the messages are semantically classifiable, forming ‘rapids’ (all events), ‘rivers’ (themed events) and ‘ponds’ (state/history).

After a coffee and JS cupcakes break, we switched to the ‘Production’ track, starting with Brian McCallister from Groupon walking us from the familiar experience of a company whose monolith has become so large and unwieldy that it eventually made adding new features virtually impossible. Groupon slowly and carefully migrated their two large installations (North America and Europe) to a micro-service system using Node.js, resulting in unblocking of further evolution, with performance and scalability improvements tossed into the mix. This was in a sense a partial continuation of the micro-service track, considering that Groupon’s new system shares many traits with the ones we talked about in the preceding talks.

PayPal’s own Jeff Harrell zeroed on a number of anti-patterns of implementing Node.js in a real-world project in PayPal. PayPal made a wholesale transformation to Node.js that is still ongoing, and their large team contributed a number of these anti-patterns. Among them were: bringing baggage from the previous projects, re-creating monolithic applications using Node.js, Googling ‘how to do X in JavaScript’, wrapping everything in promises, sloppy async code, using Node.js for everything, and ignoring the ecosystem.

The last speaker for the day was Aman Kohli from Citi Bank, bringing to us the experience of deploying Node.js to provide back-end services for mobile apps in an environment that is everything but forgiving when it comes to security, adherence to regulations and process. According to Aman, they chose Node because of the async event model, being ideally suited for mobile and sensor apps, the fact that it was approved for internal usage, that it required fewer controls, and due to the good success they had with using Hapi framework for building mobile API services.

At this point it was time to break for lunch. From several choices I picked to attend Kraken.js workshop for my afternoon activity, where I could pick the brains of Jeff Harrell and Erik Toth from PayPal on the philosophy and the plans for this open source suite we already use in our micro-services.

Evening R&R was provided to us with a combination of Irish whiskey tasting (not bad at all, but still prefer Scottish single malt) and a great local folk band treating us with a mix of traditional and Irish-treated covers.

Seriously one of the best live acts I've seen in a long while here at @nodeconfeu tonight. Are they on Twitter?

Continue to the part 2 of the report.